Considerations for Delivering Windows as a Service to Mobile End Users

Gone are the days when each user had a physical desktop or laptop with basic needs for remote access. With the consumerization of IT, most every user has their own personal laptop, tablet, or smartphone with expectations of being able to work on it whenever they need and wherever they are. In today's highly mobile world, the smart move is toward centralized image management solutions, with VDI being one of the most popular forms.

VDI for the Mobile Workforce

With virtual desktop infrastructure (VDI) solutions, end-user desktops are converted into virtual machines running on a type-I hypervisor in the data center. That hypervisor runs on a company's servers, storage, and network. By running in the data center, these desktops will receive much higher security and reliability than ever before. A piece of software called a "broker" is run on a separate virtual machine in the data center. That broker is what routes the end users to their virtualized desktop when they connect. Mobile users can use a laptop, tablet, or Web browser to connect to their virtualized desktop. No matter the device that the end user selects, the virtual desktop is viewed over the network, and the end-user keystrokes and mouse movements are sent back. A protocol, designed for VDI, is used to make the viewing of the virtualized desktop, over the network, as "thin" (or low-bandwidth) as possible while still giving the end user a rich experience with graphics, sound, and video that match their traditional physical desktop offering—regardless of whether they are working in or out of the office.

Understanding the Benefits of Desktop Virtualization

Traditional physical desktop computers were popular for many years; however, they presented a challenge: the more desktops you had, the greater the headaches and staff that you needed to administer and support those desktops. Undoubtedly, seasoned IT staff is familiar with desktops breaking, getting stolen, becoming corrupt, and having viruses. Employees have suffered with remote access troubles, not having access to the applications they needed to do their job, roaming profile corruption, and the time that it takes to get a desktop to a new employee. All of these are very common physical desktop troubles that most every person has experienced both at home and at the office as an end user. 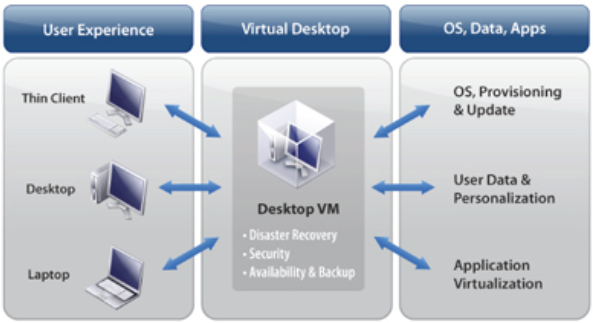 Desktop virtualization aims to eliminate all of these problems while providing additional benefits:

For the mobile workforce, the benefits of central image management are similar to those of VDI:

When it comes to mobile workers, VDI makes the users as well as IT happier, more efficient, and the enterprise more secure.

Many large enterprises have implemented desktop virtualization across tens of thousands of desktops with success. Undoubtedly, if implemented correctly, desktop virtualization can provide both IT and end users numerous benefits around efficiency, security, and workplace mobility. While desktop virtualization is powerful and popular, IT professionals should plan to keep a suite of solutions in their toolbox so that they are ready with the "right tool for the job." After all, the goal of end-user computing isn't to give end users a desktop, it's to provide (in most cases) the Windows OS and application as a service, allowing end users to securely use the applications they need anywhere, any time, and on any device.