Virtualization technology, widely adopted for its cost efficiency and ease of administration, has implications for data protection and recovery solutions. The data and applications running on virtual machine environments must be protected just as those on physical servers, but differences in physical and virtual servers have implications for your backup strategies. At the same time, virtual machine technology can significantly contribute to streamlining disaster recovery operations. In both cases, proper planning and deployment of virtual machine environments and backup solutions can positively influence the return on investment (ROI) in these technologies.

Virtual Machine Environments in the Enterprise

Virtual machine technologies such as VMware's Infrastructure 3 and VMware Server and Microsoft's Hyper‐V technology, available in Windows Server 2008, are gaining in popularity. Virtualization technologies such as these insert a software layer between the hardware and the operating system (OS), which traditionally ran directly on that hardware. The new software layer, known as a hypervisor, can act as a mediator between CPUs, memory, storage, and other hardware components and one or more OSs. 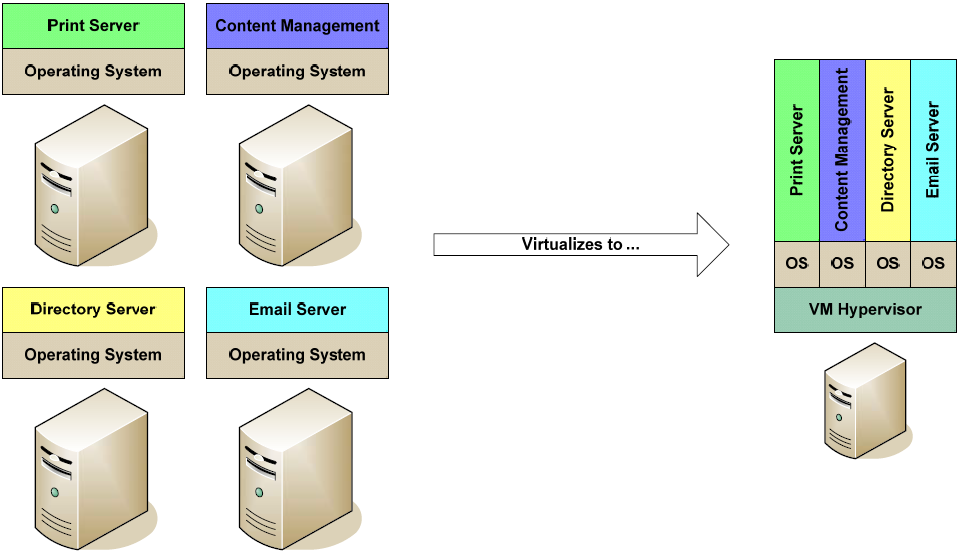 Some of the key drivers behind this adoption are

With these advantages, though, come differences in the way typical IT operations are performed. Backups, in particular, require special attention.

Moving to virtual machine environments does not change the need to protect these servers at the same level that physical machines are protected. Although virtual machines can be installed from images to new hardware ("raw iron") faster than OSs and applications can be installed and configured from scratch, there is still a need to protect the data on virtual servers. It is reasonable to presume that virtual machines will require similar service level agreements (SLAs), recovery point objectives (RPOs), and recovery time objectives (RTOs) to those of physical servers.

Specialized solutions can improve upon conventional backup methods but at the cost of increased complexity. Take, for example, solutions that offload the backup process to another server. This type of solution offers the ability to perform full and incremental backups of virtual machines, make full image backups of virtual machines, and perform these operations from a centralized management system. It does require some changes to the typical backup system:

See the first article in this Essential Series for details about source‐side deduplication compared with other data reduction strategies.

With source‐side deduplication, block‐level incremental backups are performed. This is more efficient than file‐level backups because only changed blocks rather than entire files are backed up. As a result, backups finish faster with less demand on CPU, disk, and network resources. This approach eliminates the need for a proxy server to reduce the load on virtual servers, which, in turn, eliminates the two‐step recovery process required with a proxy‐based solution. Fewer recovery steps means less complexity, less room for error, and faster recovery times.

It should be noted, though, that some applications, such as databases, may perform block‐level operations of their own within the context of logical transactions. Block‐level backup systems must take this into account to ensure that backups represent a consistent database state. If this is not possible, backups should be performed only when there are no changes being made to the database.

Depending on the backup solution and the hypervisor constraints, a data protection system with source‐side deduplication may also offer:

The last feature is especially important if you are required to recover a single user's email folder or a single table within a database. Restoring an entire database, for example, in order to restore a single table can add significantly to the time and space required to perform a restore operation.

Solutions that reduce overhead and reduce complexity yield favorable ROI for a variety of reasons:

As the number of virtual machines in business grows, so does the need for disaster recovery support. When selecting a backup solution, look for features that support creating virtual machines from a single backup instance. This approach brings several advantages. Perhaps the most important from a disaster recovery perspective is the ability to rapidly recover both virtual and physical servers with the instant availability of virtual machine images. Certain data protection products allow you to iSCSI‐connect and LUN‐map from the virtual server to the backup image, creating a temporary fully operational virtual machine without even a data transfer.

There are cost advantages as well. The ability to recover physical servers to virtual machines reduces the cost of maintaining a disaster recovery center. For example, if a production email server running on a dedicated server completely fails, a virtual machine can be rapidly deployed to a shared server in a disaster recovery site. Performance may be slower but email services can be maintained until a production‐level server is available. In addition, jobs, such as backup jobs, can continue to complete even after migration.

Virtual machine environments are a staple of enterprise IT infrastructure. The cost and management advantages of virtual environments are compelling, so backup and disaster recovery strategies should adapt to their particular requirements. In the process, though, you find that the same techniques you deploy to provide backups for virtual machines without undo overhead on physical servers yield favorable ROI. The lower overhead performance of source‐side deduplication allows for more resources dedicated to virtual machines and their applications and reduced storage costs on backup devices. In addition, the same procedures provide for cost‐effective disaster recovery.